Turin-Cape Town down the West Coast 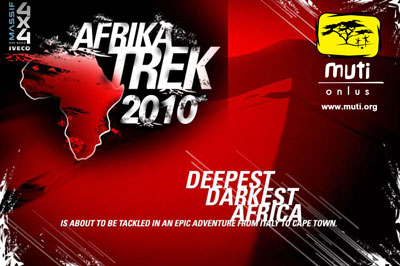 After the success of the 2007 and 2008 editions with Ducati, Muti Onlus has decided to carry out with the help of Iveco a new fund raising Raid at the same time as the first World Football Cup to be held in Africa. A group of voluntary workers from the Muti Onlus Association cross the entire African continent; this time on board two specially equipped Iveco Massif. The aim of this journey is to collect funds to help the humanity projects in favour of the poorest children in Africa. A charitable journey which on its way take human aid and distribute hundreds of pairs of shoes, uniforms and footballs to these poor children with the project called ‘A shoe for a dream’

The ‘Raid’ start from the Turin Iveco Offices and then work its way through Europe and down the West Coast of Africa crossing through Italy, France, Spain, Morocco, the Western Sahara, Mauritius, Senegal, Mali, the Ivory Coast, Ghana, Togo,Benin, Nigeria , Camerun, Gabon, Congo, Congo DR, Angola, Namibia and South Africa. The arrival of the expedition in South Africa coincide with the beginning of the World Football Cup games.

This itinerary has been chosen because it follow in 2010 what is the virtual route of the World Football Cup from the present holders of the Cup (Italy) to South Africa where it is once again be put up for the winning. The journey traverse countries afflicted by famine , diseases, segregation and exploitation., conditions which cause very serious problems for all but mainly for the children who very rarely have a serene childhood.

The object is to use the game of football as an educational example for transmitting basic ethical values such as fair play, altruism, friendship and respect of others, guaranteeing the children a serene childhood and better future, far distant from all the hazards that they normally find while growing up.